Home / Our articles for you / Types of folding knife locks

Ferat black | Gary Webb
Quite odd to get a rating review before I,ve received it…. Still waiting…

The history of the first knife

We will focus on the most common locks. These are the main clamps that serve as a reference for many, many knife makers around the world.

A folding knife is a convenient and functional tool that has long won love and recognition. Of course, a pocket knife, or, as it is more often called, a folding knife, is easier to carry with you than a knife with a fixed blade. However, at all times, from the first appearance of a knife with a retractable blade, there was a question - "how to protect the owner from sudden closing or opening of the blade." In our time, castles of different types are unknown. A folding knife, like any tool, has many varieties, suitable for different uses. 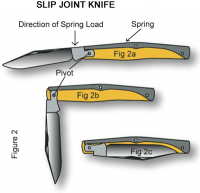 The simplest version of a folding knife lock. In fact, this is not even a lock as such - when unfolded, the blade is fixed with a spacer that acts as a spring. If you press firmly on the butt of the blade, the knife will fold. The lock does not provide rigid fixation, but still protects the blade from accidental folding.

Slipjoint pocket knives are not designed for tough jobs, but they are ideal for light everyday tasks - from slicing food to planing wooden blocks.

This is the most popular lock used in modern folding knives - its simple design and reliability make it one of the best. In the open state, the blade directly holds a part of the liner - the spring-loaded plate abuts against the heel of the blade. To fold the knife, simply slide the plate away from the blade. Most knives can do this even with one hand.

Renowned knifemaker Bob Dozier has developed a universal Tab Lock. The fundamental difference from the classic "liner" is that not a part, but the entire plane of the liner adjoins the "heel" of the blade, providing better grip and reliable locking. Thus, the whole plate is the spring, not a separate section of it.  Folding knives with Liner Lock type locks are used for a wide variety of tasks, as they are able to withstand heavy loads on the blade, thanks to their reliable design.

The Frame Lock is a kind of variation of the classic "liner", with the only difference that the closing spring is not a metal plate, but part of the handle. Folding knives with this type of lock have a steel handle. Some craftsmen believe that “frame” locks are more reliable to protect the owner from accidental pressing, especially during heavy work with a knife. As an additional argument, fans of this type of retainer highlight the absence of "unnecessary" parts in the knife and a simpler design.

An interesting and rather rare Bolster lock is a variation of the "lock frame". The principle of its operation is exactly the same, only the locking plate is part of the bolster.

One of the most famous and first locks, which is sometimes called the "spine" for the characteristic metal part of the lock, which runs along the entire "back" of the knife handle. The structure of the castle is quite simple, but at the same time reliable. The same "spine" simultaneously acts as a lock button and a blade stopper in the open state. With a special hook, the rocker arm runs along the entire handle and engages in a slot in the "heel" of the blade. A thin plate inside the handle acts as a spring.

The “back lock” has enough varieties. For example, Front lock (Mid lock), used by many well-known companies. The only difference between these types of locks is that in knives with "mid lock" the close button is in the middle of the handle.

A simple and convenient blade locking system originally conceived for use in automatic knives. Such a lock was supposed to block the blade both in the open and in the closed state. Most knives with Button Lock open and close easily with one hand.