Home / Our articles for you / AiR Zlatoust

Ferat black | Gary Webb
Quite odd to get a rating review before I,ve received it…. Still waiting…

The history of the first knife

The history of the unique art of Zlatoust steel engraving is more than 200 years old. It all started with the organization in 1815 of the Zlatoust factory of "white weapons", as cold weapons were called then: sabers, swords, checkers, cleavers and much more. But from the first days the factory produced not only military, but also ceremonial and decorated decorated weapons. The foundation was laid by German gun-makers specially invited for training from Solingen. Born two centuries ago as a result of the joint work of European masters and Ural craftsmen, this art of metal decoration acquired its unique face in Zlatoust.

Zlatoust engraving on metal, as an art, absorbed the richest traditions of Russian and Western European gunsmiths of the 17th-18th centuries, but the Ural engravers created their own original style of decorating weapons. Initially, the designs on the blades consisted of several traditional compositions that were not related to each other. Over time, detailed thematic plots appeared: real figures of warriors, massive battle scenes, hunting motives, Ural landscapes. The remarkable art of Zlatoust artists-engravers throughout the 19th century remained at a high level, and the products in terms of their artistic value and technique of execution were considered unsurpassed not only in Russia, but also in the oldest weapon centers in Western Europe. At the beginning of the 90s of the XX century, several art workshops of non-state ownership appeared in Zlatoust, which gave a further impetus to the revival and development of original art - metal engraving.

The company "AiR" was founded on July 26, 1999 with the aim of reviving and developing the best traditions of making edged weapons and household items, decorated in the style of Zlatoust engraving. At that time, up to a dozen small enterprises were working in Zlatoust, engaged in the manufacture of decorated edged weapons. Unlike the firms that produced expensive blades decorated with gold, the A&R Company started the serial production of simple and reliable hunting knives. Zlatoust decorated weapons already in the 19th century gained fame not only in Russia, but also far beyond its borders. Zlatoust decorated blades are kept in the Kremlin Armory, in the Hermitage, in the Military History Museum of St. Petersburg, in the State Historical Museum in Moscow, in the Library of Congress of the United States, the Imperial War Museum in London and in the Louvre of France

By now, the AiR Company has grown to the level of a leader in the manufacture of working knives and decorated products. The organic synthesis of the traditions of the gunsmiths of the past and modern technologies, combined with excellent quality, ensured the popularity of Airov knives among tourists, fishermen, and hunters. The blades are forged from Zlatoust high-carbon corrosion-resistant steel with excellent technical characteristics. The assortment is constantly growing. 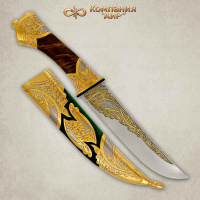 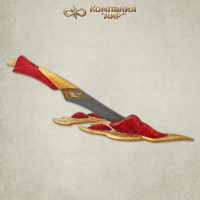 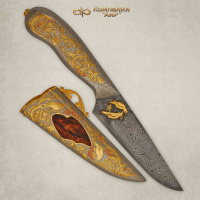 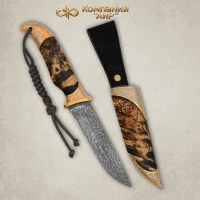